LONDON PROFESSIONALS TO WORK WITH YOUNG
ACTORS IN SOUTHAMPTON

Top flight directors from the celebrated Royal Academy of Dramatic Art (RADA),
The Urdang Academy and from The Voice are sharing their skills with youngsters
in Southampton to develop future stars of stage and screen.

"I'm excited to be part of such a forward thinking initiative"

Carys Williams, the Widening Participation & Outreach Manager at RADA said the following about Theatre for Life.

“RADA is excited to be working with Theatre for Life to encourage young people from diverse backgrounds to participate in the arts. By offering a RADA workshop and Q&A session on drama school auditioning, we hope to open access to drama school training for talented young people in Southampton."

The Royal Academy of Dramatic Art (RADA) offers vocational training for actors, stage managers, designers and technical stage craft specialists. RADA was established in 1904 and has since built an outstanding reputation as a world-renowned centre of excellence, offering the best possible facilities, exceptional teaching and strong links with the industries that employ its graduates. RADA’s student population is a diverse community, united by a shared passion for theatre-making. RADA prides itself both on the professional standard of their student productions and on their track-record of employment in theatre, film and television.
RADA figures 2015-16 – based on BA Acting course

Professional tutors and directors from top London drama schools including RADA, East 15 and Urdang are coming to Southampton to help young actors prepare for their future careers.

In the Acting Auditions workshop, actors will be guided by Jason Warren (professional director at East 15 Acting School and artistic director of Axis Arts) in a three-hour audition masterclass. RADA will then continue the students’ professional development in a practical class, followed by a Q&A about the experiences of auditioning for and attending a full-time drama school. As a world-leading drama conservatoire, RADA not only nurtures the performing skills of its students, but understands the discipline required to succeed as a professional artist in today’s industry.

In the Musical Theatre Auditions workshop, performers will be guided by international singing coach Stephen King, who has worked on The Voice and teaches at the
Urdang Academy in London. Stephen will be exploring technical singing and how to prepare for audition. This will be followed by an acting through song session led by
professional actor, Ameer Choudrie (London Road, BBC Films / National Theatre).

Michelle Smith, Artistic Director of Theatre for Life: “We are very honoured to have such prestigious links such as RADA and international voice coach Stephen King working with the young actors and have every confidence that the young actors will truly benefit from such expertise."

“At Theatre for Life we want to provide industry standard workshops and opportunities in Southampton at affordable prices to ensure young actors are not hindered by financial constraints.”

Theatre for Life is a new company set up to encourage social inclusion through educational workshops and community theatre projects.

The company’s activities will provide benefit to young people (14-25 years) who cannot afford to participate in the performing arts in the Southampton area - they can join both the Youth Theatre group and Community Outreach projects for free, these groups will be starting later in the year.

Michelle Smith says: “Theatre for Life believes in unlocking young people's creativity, developing self belief and providing opportunities to help the next generation of performers".

Emily Hindle (19) is currently studying on the (BA Hons) in Acting & Contemporary Theatre at East 15 Acting School and is a Theatre for Life mentor. She spoke about her own experiences of using theatre to improve her life.

"From a young age I struggled with socialising and confidence; since starting theatre and performing this has changed drastically. Not only am I more confident as an actress, but more confident in myself around people and in a professional environment, and I have began to accept and celebrate who I am as a performer and person"

As part of Theatre for Life's investment in local young actors and their career development the company have formulated links with R.D Casting & Production Ltd. Talented and committed actors who attend the Theatre for Life groups may be able to get representation and will be recommended to the Founder and Managing Director Michael Moor. Michael Moor (former Head of Musical Theatre at the Guildford School of Acting) is leading the way, with versatile performers who are also directors, writers and producers.

Young actors who come from low income households will be able to attend both the
Acting Auditions and Musical Theatre Auditions workshops at a discounted price. Other young hopefuls can also attend the workshop at a heavily subsidised price of £20 for Acting and £25 for the Musical Theatre workshops.

REMEMBERING THE SINKING OF THE RMS TITANIC - WHAT CAN WE LEARN FROM THE PAST TO HELP INFORM OUR FUTURES?

Emerge is an insightful and informative look into modern day perspectives contrasted against stories of a community dealing with the aft... 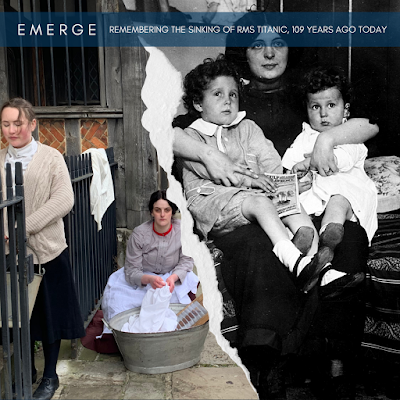